It takes a lot to become a successful rock star. Talent, looks, hard work and usually lots of good luck are all good to have. You can have any (or all) those attributes, but that doesn’t guarantee you anything. But if you do happen to make it to the top, you’re only a power chord away from a bad decision – one that can derail everything you’ve worked for. In some cases it’s the matter of a single high-profile appearance gone wrong (Sinead O’Conner, Ashlee Simpson, both on SNL), some it’s a matter of a talking too much (Dixie Chicks) and in other cases it’s a poor decision about a song, image or video.

Today, we have three cautionary tales of classic rockers who made that bad call. All of them paid their dues at the bottom of rock’s pecking order for years before hitting the big time; they all released albums early on that never hit and toured like crazy. They should’ve known better, but once they finally hit the pinnacle of rock stardom, it all came crashing down. 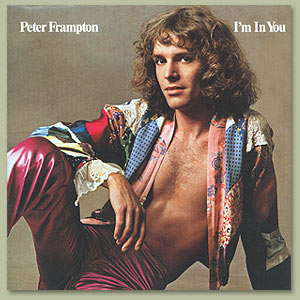 After playing professionally for almost a decade (first in The Herd, then in Humble Pie), Frampton went solo in the early 1970s and hit the tour circuit opening for anyone and everyone. Like so many of his road dog contemporaries (KISS, Bob Seger, REO Speedwagon, Foghat, etc.), word on the street was that he was better live than on record. So naturally, a live album was in order.

But Frampton Comes Alive! was no ordinary live album – it set the standard for the “double live album” for the rest of time. It was also ubiquitous – even getting a mention in “Wayne’s World” sixteen years after its release. It sold a gazillion copies during America’s Bicentennial year – bringing Frampton from his usual “special guest” billing to headlining (and filling) stadiums.

But when one hits those rarified heights, there comes that pesky little problem of the follow-up. Frampton found out what those before him had experienced; pressure from management and the label – everybody wants a little more. Tour until you drop. Quickly record a new album, but make it better than the last one. With no time to relax, the period between albums saw Frampton lose his original demos, hire guards to keep overzealous fans away from his recording sessions and tend to his high-maintenance girlfriend, Penny McCall. And finally, he posed shirtless for his Rolling Stone cover shot.

Oops. That picture, along with the “I’m In You” album cover (and wimpy lead single) erased all his past – guitar hero, Humble Pie, all that – and lumped him into Leif Garrett/Shawn Cassidy territory. Then things went really wrong – the car accident, palimony, ill-advised movie roles, the revelation by Sweet Connie Hamzy….

What happened next: Frampton had a terrible streak of bad luck following “I’m In You.” He broke up with his girlfriend, was seriously injured in a car crash in the Bahamas (while trying to locate the aforementioned girlfriend, who was partying with members of the Average White Band), starred in the Robert Stigwood’s film debacle “Sgt. Pepper’s Lonely Heart’s Club Band” and was sued for palamony. If that wasn’t enough, a cargo plane crash in Brazil (that killed three people) destroyed all his gear, including his prize Les Paul, the one pictured on Frampton Comes Alive! He has successfully toured on the classic rock circuit for the past couple of decades, despite losing his hair. 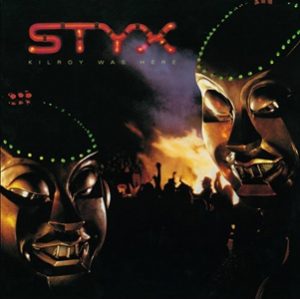 Styx was the little band that could. Formed as a South side of Chicago neighborhood combo in the pre-Beatlemania days, the guys kept it going long enough to land a contract with rinky-dink Wooden Nickel Records in the early 1970s. A bunch of not-very-successful albums were recorded; a local DJ started playing “Lady” from Styx II and the hit spread nationwide. Endless gigging ensued; a contract was signed with A&M; guitarist John Curulewski quit and was replaced by Tommy Shaw (a good career move for both Shaw and Styx); finally the band went a little more mainstream and less proggy and started an upward trajectory.

In 1977, all that hard work finally paid off; Styx’s seventh album, The Grand Illusion, was released and sales went through the roof. Multiple millions of units moved. The next couple records went the same route; hit singles, arena tours and a rabid fan base, despite universal scorn from the critics. 1979’s Cornerstone brought the band its only #1 hit, “Babe,” written by keyboardist Dennis DeYoung. But it also brought trouble to Styxland, as guitarist Shaw accused the band of heading into “Barry Manilow territory” with the hit ballad. Tension escalated; DeYoung was canned, but cooler minds prevailed and he was reinstated after a few weeks. But that’s when the trouble really began.

Early 1981’s Paradise Theatre was a concept album, using a derelict theatre as a metaphor (or is that a simile? You would think that somebody with an M.S. in journalism would know the difference here!) for the current state of Jimmy Carter’s America. A huge hit (Styx’s only #1 album), it set the stage for another “concept” album about music being outlawed. Not a new concept, as The Who and Rush have both used that theme previously; only difference is that theirs didn’t include any songs about robots.

Whatever. The single “Mr. Roboto” from 1983’s Kilroy Was Here was cheesy, but far worse, was the tour, film and “acting” by the Styx members to open dates on the Kilroy tour. The goodwill Styx had built up over the past decade went bye-bye and fans ran towards the exits, covering their ears. Sick of the entire thing and strung out on coke, Tommy Shaw was a zombie for the tour and quit the band shortly thereafter. After five platinum (or better) albums, he must’ve really wanted out.

What happened next: Styx issued a tepidly-received live album in 1984 and was put on ice, and then members started releasing solo albums. The band regrouped with Edge Of The Century in 1990, but without Shaw, who was off enjoying success with the supergroup Damn Yankees. Although the band scored a major hit single (“Show Me The Way” #3), the album tanked and the band was dumped by its long-time label, A&M. A 1996 reunion tour with Shaw (but without drummer John Ponozzo, who was suffering from advanced liver failure which eventually killed him) was a success, but the band never scored a hit album afterwards. Today, the carcass of Styx still tours, but with only guitarists Shaw and James Young remaining from the glory days. 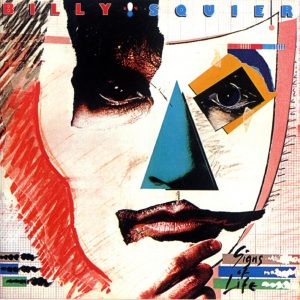 Billy Squier was the first AOR superstar of the early 1980s. Throwing a mix of Zeppelin, Clapton, Rolling Stones and more into his music, his sophomore album, Don’t Say No became an instant classic. Mistakenly labeled by some as an “overnight sensation,” that tag couldn’t be farther from the truth, as he spent over a decade trying to make it in the music business. He played in several bands before releasing two albums with the band Piper, whose biggest claim to fame was opening for KISS in 1977. His solo debut, 1980’s The Tale of the Tape was a minor hit; by the time Don’t Say No hit, Billy Squier was over the age of thirty. Better late than never.

By early 1984, Squier had parted ways with producer Mack (of Queen fame) and started a new album with “Mutt” Lange (architect of classic AC/DC and Def Leppard albums and the future Mr. Shania Twain). That collaboration was quickly put on ice due when Mutt learned of an alleged tryst between Squier and the first Mrs. Mutt way back in the 1970s.  (Wasn’t that what the 70s were all about?)

Mutt said “No way, Guillermo!” and pulled out of the project; Jim Steinman, songwriter best known for penning hits for Meat Loaf, Air Supply and Bonnie Tyler was commissioned. The ensuing album, Signs of Life is surprisingly good and diverse, despite its cover art. Actually, he delivered an album that showed “artistic growth.” Even Rolling Stone magazine is impressed; life is good. By now Squier is a big enough artist to warrant a “World Premiere Video” on MTV. Not Bruce Springsteen big, but an A-list rocker nonetheless. The first single, “Rock Me Tonite” is tagged to have its video debut in July 1984.

What happened next is a matter of who you want to believe. Different parties have blamed others for what happened next; either way, the “Rock Me Tonite” video was not the most “manly” video ever released. Yes, videos by Culture Club and Prince were far more androgynous than his, yet it wasn’t cool because Squier was a macho “rocker.” Truth of the matter is, that his dancing was about on the same level as other unfunky white guys like Mick Jagger doing the chicken dance, but the silk sheets, pastel colors and Flashdance shirts didn’t help his case at all. End of the day – despite the song being the highest charting single in his career, it drove away fans and his career never recovered.

What happened next: Despite the video debacle, Squier renegotiated his recording contract in 1985 to one of the richest in the industry. Unfortunately for his record label (Capitol), like many artists who signed huge contracts at the top (Janet Jackson, R.E.M., ZZ Top, Mariah Carey, Motley Crue), Squier’s best days were behind him. None of his subsequent albums (or singles) managed to crack the top 40 and each release was less and less successful. He ended up quitting the industry in 1993, following the release of his non-charting Tell The Truth album. Shows you what happens when you don’t pay attention to Peter Frampton.