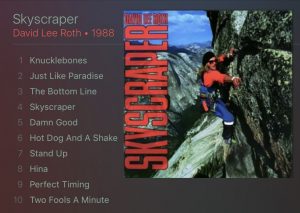 Roth’s next album, 1991’s A Little Ain’t Enough (recorded with guitarist Jason Becker) was far less successful and produced no memorable singles (or videos); the follow-up tour paired him with openers the downward-trending Cinderella (ironically an opener on the Eat ‘Em And Smile campaign now on a downward trajectory after their own arena-headlining tour) and newcomers Extreme, before being scrapped for overall apathy.