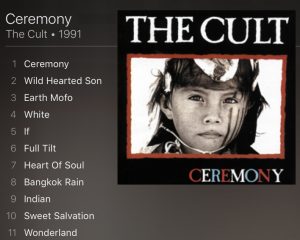 Released in September 1991, Ceremony, the fifth album by The Cult was the first time in the band’s career that an album wasn’t more successful than its previous one. A perfect storm of factors contributed to this: Band in-fighting, bad timing and a quickly-changing music scene all led to an album that peaked at #25 and quickly was forgotten.

The Cult started life as part of Europe’s alternative wave of the early/mid 1980s. Core members Ian Astbury (vocals), Billy Duffy (guitar) and Jamie Stewart (bass) were joined by a revolving door of drummers. The band quickly became a fan favorite in both America and Britain with “She Sells Sanctuary” off its second album, Love. The follow-up, the Rick Rubin-helmed Electric moved the band away from its alt roots and into the hard rock/heavy metal mainstream. It reached #38 and effectively bridged the gap between the alternative and commercial hard rock worlds.

Electric was followed by 1989’s Sonic Temple, produced by Bob Rock (whose engineering/producing resume included many successful mainstream artists including Survivor, Loverboy, Bon Jovi, Kingdom Come, Krokus and Aerosmith, among many others), Sonic Temple was a top-ten, platinum smash that moved the band into bona fide arena headliner status. It seemed that The Cult had finally made the big time.

The band’s reign at the top was short lived: The first crack in the facade was the sudden departure of Jamie Stewart in 1990. Citing that he was fed up with the constant stress between Astbury and Duffy, he quit the band and was not replaced. Around the same time, touring drummer Matt Sorum jumped ship to join Guns ‘n’ Roses, replacing drug-addled drummer Steven Adler.

The Cult, now reduced to the duo, were faced with these challenges in creating the follow-up to Sonic Temple. In addition, Bob Rock, whose production was an integral part of Sonic Temple’s success, went on to produce two heavy metal classics, both of which peaked at #1 and sold millions of units, Motley Crue’s Dr. Feelgood and Metallica’s Metallica (a.k.a the Black Album).

Both the Crue and Metallica albums were hits commercially (both peaked at #1) and produced hit singles and hit videos; both bands toured successfully on the strength of the albums. Metallica’s album featured particularly grueling recording sessions, stretching from October 1990 through June 1991, putting Rock out of contention for producing the follow-up to Sonic Temple.

The band elected to use Richie Zito, producer of hits such as Eddie Money’s “Take Me Home Tonight,” Cheap Trick’s “The Flame” and Bad English’s “When I See You Smile,” a move that no doubt alienated their fan base. Released on September 24, 1991 (the same day as Nirvana’s Nevermind), the band found the marketplace had changed since their last release – it was not very receptive to bands from the 1980s. Instead of a top-ten and platinum success, it settled for a gold album (500,000 units sold) and a peak of #25 in Billboard.

The music on Ceremony? For one thing it lacked the Bob Rock vibe that Sonic Temple benefited from. (Listen to Dr. Feelgood and Metallica a.k.a. The Black Album to hear what Rock brought to these bands.) Instead of going for Rock’s high-gloss sheen, it clearly went for the radio-friendly sound that Zito was famous for.

After Ceremony’s release, things only got worse for The Cult. The band was playing much smaller venues in support of the album; the lack of album sales and concert tickets only furthered the problems between Astbury and Duffy; finally, the family of the Native American boy on the cover of the album (and in the “Wild Hearted Son” video) sued the band and its record companies (Sire in Europe; WB in North America) for $61 million. (The case was eventually thrown out of court.)

The Cult never recovered from the downward slide that Ceremony started. Although the music isn’t a huge departure from the sound that the band was known for, the sterile, commercial production and band in-fighting, burnout and a changing musical landscape all took their toll and led to the band’s dissolutions after the next album. Although the band has since reformed, no albums released since have charted higher than #37 – 12 positions lower than Ceremony’s peak chart position in America. (Note: A UK only compilation, Pure Cult, released in 1993, peaked at #1 in the UK charts.)